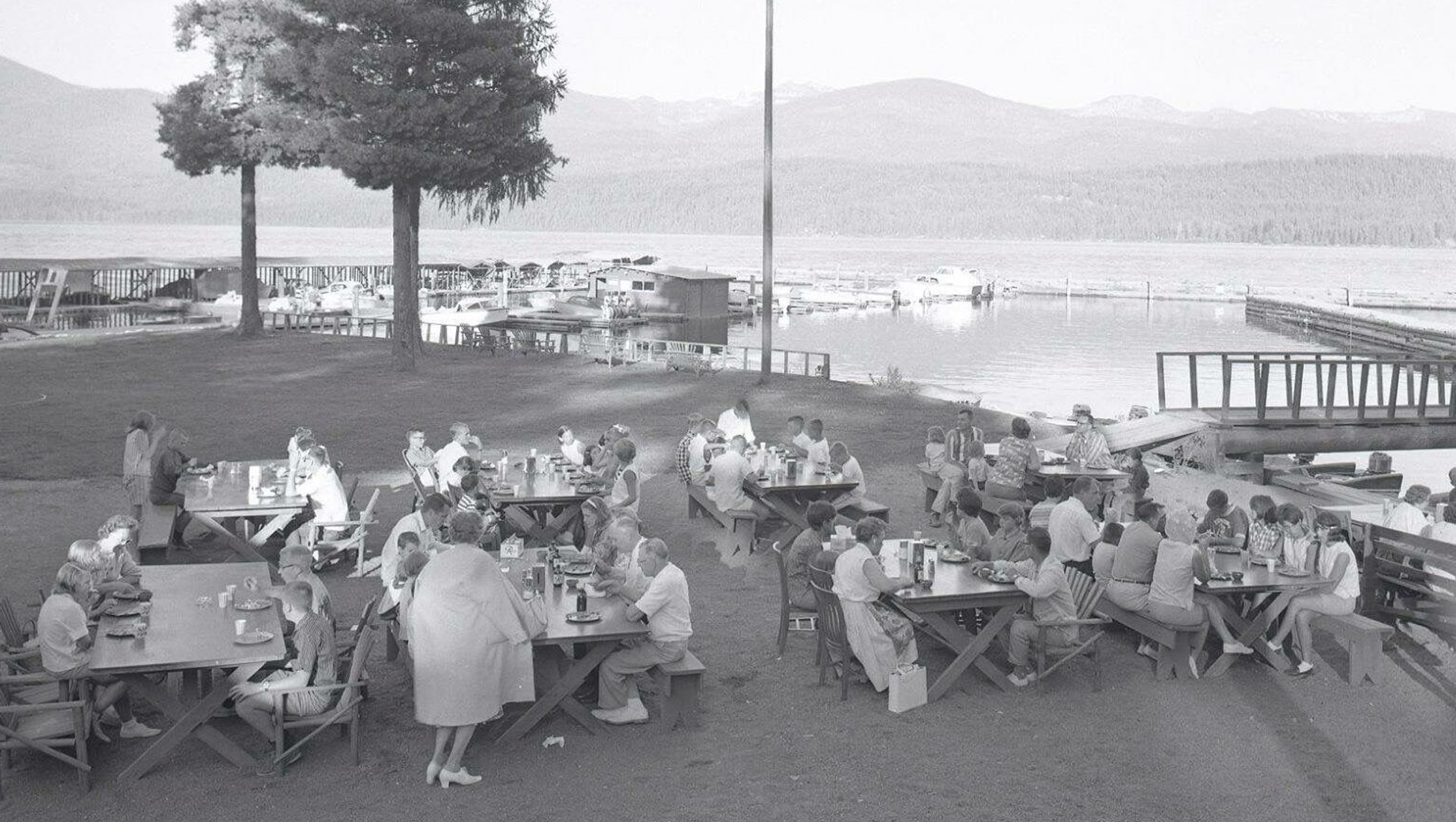 Our Past on Priest Lake, Idaho

Thank you for your interest in the unique history of Elkins Resort on Priest Lake. Read on to discover more about the journey of our secluded cabin rentals in Idaho, beginning in the early 1930s to the present day.

In the early 1930s, Ike Elkins loaned money to two developers to build a hunting and fishing camp. When they defaulted on the loan, Ike took over the project and began to build Elkins Resort in 1932. The men who were hired to build the cabins and lodge were paid only with room and board, plus clothing. The first cabins built were the creek-side cabins. These structures were frame, rather than log structures and the workers lived in a few of them while they were building the rest of the resort. Cabin 7 was used as a cookhouse for the workers. The construction of the remainder of the cabins and the lodge were built with cedar logs. The original roofs on all the cabins and lodges were cedar shakes. At present, most of the cabins have been converted to metal roofs, except the lodge, which has a cedar shake roof.

Lodge and lodge area: The lodge originally housed a check-in area, a bedroom for the owners, and four sleeping rooms (which are now the bar), each with a door and window facing the lake. The lodge also housed a small store and dining area, a fountain-style lunch service, and a kitchen to handle a small dining service. A small washhouse stood behind the lodge with separate bath and toilet areas for men and women.

In the 1980s, the walls in the bar portion of the lodge were restructured, as the logs in the walls at that time were short and unstable from the original sleeping room configuration, and there were also many doors on the lakeside of the bar. Logs from an old log icehouse, that were no longer usable at the resort, were used for the reconstruction. During the reconstruction of the walls, the floor and roof of the bar area, were left in place with log abutments temporarily keeping the roof intact. The logs were hand-planed and stained to match the existing bar walls and ceiling.

A two-story apartment building was erected behind the lodge, where Ike and Sue Elkins resided, along with some employees. This structure later burned to the ground in 1970. Very few photographs exist from the days before 1970 when the apartment building burned with most of the documents.
Structured roads in the resort were not prevalent in the early days, and individuals were allowed to park their vehicles wherever they chose, including in front of the lodge. The pathway running in the front of the cabins was still used by vehicles previous to 1984 when it was blocked to guest traffic.

It is unknown when the first breakwater was built. There were several docks with open slips in the beginning years of the resort. Small fishing boats were provided for cabin guests, and a gas facility was present on land. The land gas facility was improved in the late 1980s with an above-ground tank and cement containment structure to comply with new requirements. A walking bridge was in existence from the side of the lodge to the south beach area, which deteriorated and was removed at some point in time. A USFS-built walking bridge now connects the resort area to the south beach and hiking trails to Lakeview Mountain and Kalispell Bay.

The original cabins had no plumbing, hence no bathrooms. Bathrooms were either incorporated into the original structure of the cabins or added onto them at some point in time. Many of the lakefront cabins had sleeping porches within the cabin structure, which were later enclosed. The original electrical power source was a power plant (now Cabin 4), which generated minimal electricity from Reeder Creek. Guests in the 1960s were allowed to add on to the cabins as they saw fit. This is the reason why each of our secluded cabin rentals in Idaho is a little different at our resort.